What Is The Most Secure Way To Destroy A Hard Drive? 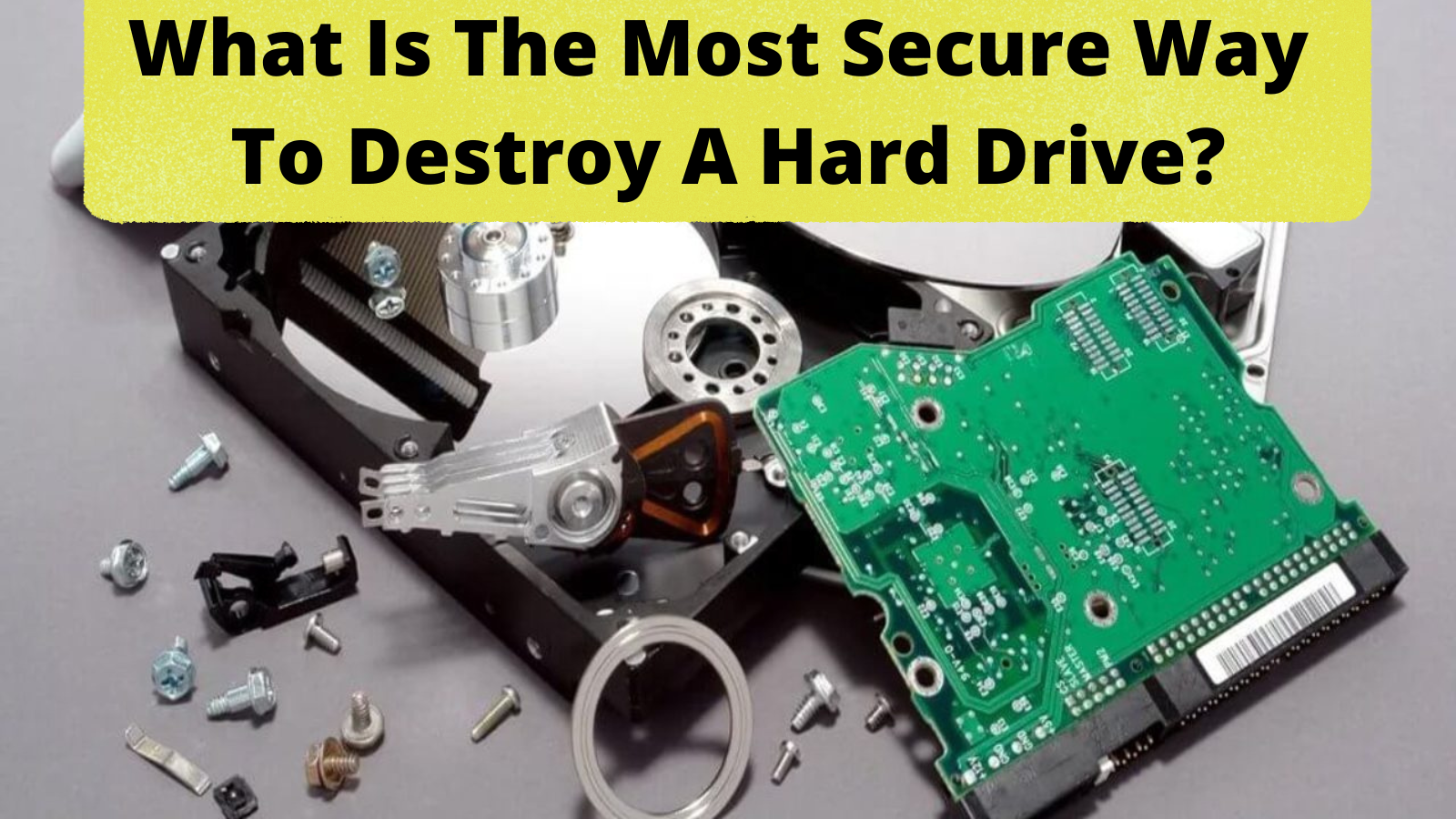 What is the most secure way to destroy a hard drive may seem like a weird question to some, but is it? A hard drive can be a complicated piece of hardware as it’s purpose is to hold information. Many times hard drives contain sensitive and confidential data that can destroy people’s lives in various ways.

Due to the importance of that data, many people wonder what is the most secure way to destroy a hard drive. It is often not enough to wipe a hard drive that you intend to dispose of as a tech savvy person could retrieve what was originally on the disk.

There are lots of software on the market designed to restore deleted data, so be aware! We will answer the main question and others, so stick around so you can be more informed on what to do.

What Is The Most Secure Way To Destroy A Hard Drive? – The Facts

The most secure way to destroy a hard drive is to use physical destruction. Hard drives contain lots of sensitive information and it’s important that they are destroyed properly so that their data cannot be recovered. Whether you are destroying your own unwanted drives or disposing of corporate devices, the purpose remains the same: destroy all components so that they can no longer be read.

Some methods include placing in acid, burning, breaking with a hammer, disassembling and shattering the hard disk inside. Whatever method you use, the key remains the same, the disk which spins inside the hard drive must be obliterated as that contain all the data.

How To Destroy A Hard Drive Permanently

As mentioned earlier in the paragraph above there are many ways to destroy a hard drive permanently. We mentioned using acid, pulling apart the casing and breaking the glass, hitting it with a hammer and even burning.

However, the ways to do so aren’t limited once the job is done completely. You can place it in a grinder, to pulverize all components to shreds. Once you can break the hard disk on the inside of the case in many pieces, there is no way for anyone to retrieve any data from your hard drive. What is the most secure way to destroy a hard drive?: we believe breaking the disk to shreds.

How Do You Destroy A Hard Drive With A Drill?

The most common way to destroy a hard drive with a drill is by drilling through the side of the hard drive, then pulling the platters out. You will want to be careful and wear eye protection because there are small parts that can come flying off during this process.

If your drill is powerful, it will penetrate the casing and put holes in the platters, hence rendering them useless, be sure to drill as many holes as you can. It is a simple as that, so be sure the drill is strong and the bit you have is made to drill through metal, which makes the process easier. Be sure to take the hard drive out of the computer before destroying.

How To Destroy A Hard Drive Without Removing It

There are several ways to destroy a hard drive in an efficient manner, but the easiest and quickest method is to use magnets. By putting the magnetic actuator mechanism at the end of a hard drive, you could easily destroy it.

Other than that, it would be unwise to try to destroy a hard drive without first removing it from the computer as you will damage the motherboard and other components in the process. The only sure way to ensure complete destruction is to use a degausser, which is the magnetic device mentioned earlier.

What Liquid Will Destroy A Hard Drive?

To us one of the surest ways to destroy a hard drive with a liquid is with hydrochloric and nitric acids but is dangerous. If a hard drive is submerged in high-density alcohol or ink, it will be destroyed. Water, on the other hand, can corrode and destroy the drives if left for an extended period of time.

But there are other liquids that can do damage to your computer as well as to others. The liquid you want to avoid at all costs is called ethylene glycol and it’s usually found in antifreeze coolants and brake fluids. If this were to seep into your equipment it could lead to corrosion and irreparable damage.

Does Destroying The Hard Drive Erase Everything?

Yes, destroying a hard drive will erase everything, once done correctly. Hard drives store data by magnetizing the magnetic material that coats their platters. When you describe something as “destroyed or erased”, you’re essentially saying it’s unreadable.

Hard drive destruction is important for the safety and security of data. Other than that it is difficult to stop people from using advanced data recovery techniques to get their hands on your business secrets. Follow the process in “How To Destroy A Hard Drive Permanently” and you should be fine.

Can A Hard Drive Be Permanently Erased?

Hard drives can be permanently erased by writing over the data with a strong magnet. Theoretically, this should destroy every bit of information that was stored on the hard drive. This process is not guaranteed to work with each and every hard drive, however. It’s also quite difficult to do by hand, since it requires opening up the hard drive and using a special degausser machine.

The safest way to permanently erase a hard drive to be sure is to destroy it, but if you want to keep the device, and use again, use the degausser. The sad truth about hard drives is that even overwriting with random data does not guarantee complete erasure.